Unlike most of my trips this one had a loose agenda from start to finish. I was traveling in a group of six people for ten days. We planned to spend four nights in Cape Town before heading on safari. We stayed at the Urban Chic hotel in Cape Town’s city center. We had various views of Table Mountain from the hotel as well! 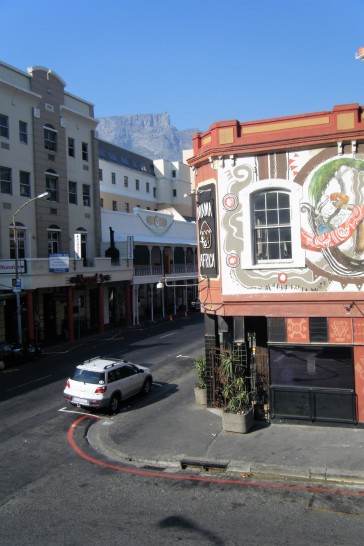 After traveling for twenty hours from Washington, DC to Cape Town we discovered that our bags were still in New York where we had our first connecting flight. First thing the following morning we hit up Edgars  to pick up the necessities for a day or two.

Once properly dressed for the day, we met up with the rest of the group. We planned to take in the expansive views of Cape Town from the top of Table Mountain. We took the cableway (cable car/gondola) to the plateau at the top of the mountain, at approximately 3,500 feet. 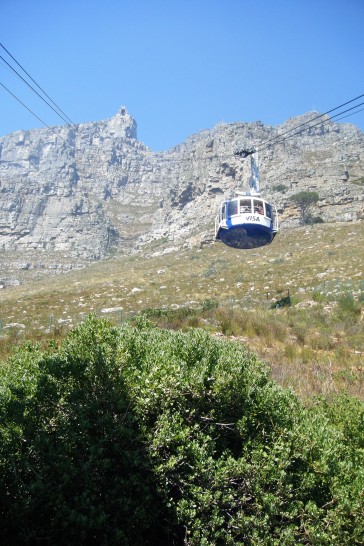 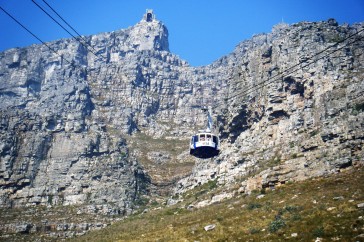 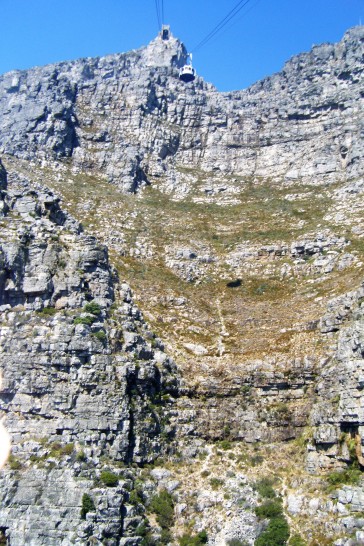 The views were stunning as we ascended to the top. 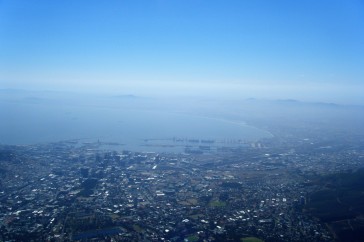 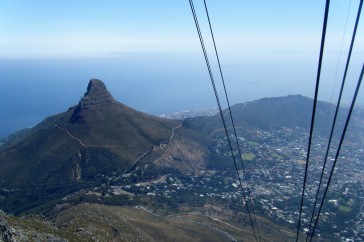 For some reason I wasn’t expecting the water to be so blue.

Quick photo op with the South African flag upon exiting the cableway station on top of the mountain. In case you were wondering, that hat was from Target back home and was not a South African purchase. Somehow managed to have that in my carry on?!

We spent some time at various viewing platforms. 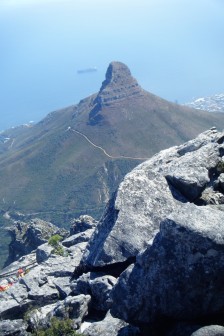 We lucked out with a relatively clear day.

We’re on top of Table Mountain!

In hindsight this was a horrible idea, but we were super excited for the adventure ahead and we were on vacation. We enjoyed a bottle of champagne at the cafe on top of the mountain.

It was ten years ago so I don’t remember if we planned to hike down or if we decided hiking down after a bottle of champagne was preferred over the cable car?!

We were all smiles at the start of the decent.  A few things my older, wiser self noticed: we are NOT properly dressed for a serious hike down a large mountain: there are no hiking shoes in sight, there was a lack of water, and I am carrying multiple purses/bags. At least I have a hat?!

It was starting to sink in just how unprepared we were for this hike down a mountain but look at those views! 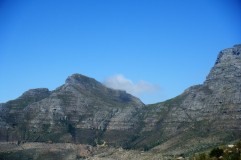 I don’t remember how long it took to reach the parking lot but it felt like many hours and a massive, sweaty victory. I read that it takes about two and a half hours depending on your pace so I would assume it took us over three hours to descend that day.

Oh look, we did have one bottle of water! 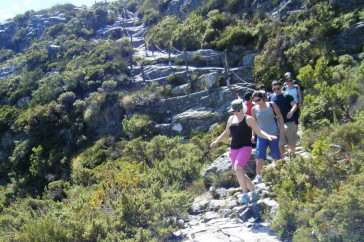 After a super fun night out with the group we arrived back at the hotel very late in the evening/early morning and saw our lost luggage in the lobby! It was a miracle!

We had big plans for day two. The ladies were going to a bike race and brunch at Camps Bay before touring Robben Island. None of us are cyclists but it was super fun to cheer for awhile. It felt like being in NYC on marathon day. Cape Town is home to the world’s largest timed cycle race that is a nine day celebration in March. The 41st running is wrapping up right now. Meanwhile, the guys were going shark diving! 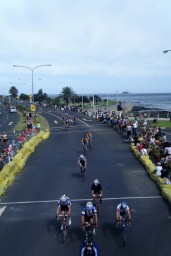 South Africa was also preparing to host the 2010 FIFA World Cup the following year so we saw the first of many new soccer stadiums that were being built for the event. 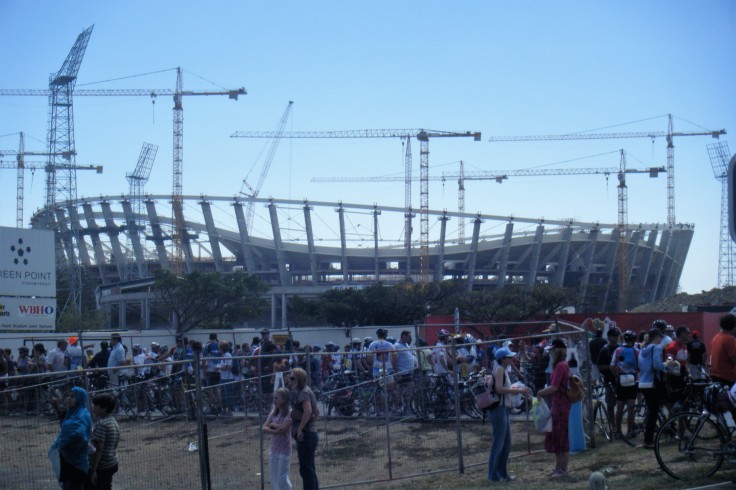 Afterwards we headed to the V&A Waterfront to pick up our tickets to tour Robben Island. Due to high winds and weather conditions it was deemed too dangerous for ferries to operate so we were not able to go. Gotta save something for next time, right?

The guys went shark diving but didn’t see any sharks. We eventually regrouped at a German beer garden (no longer open) to cool off the sunburn we got from hiking down the face of Table Mountain. It felt right. 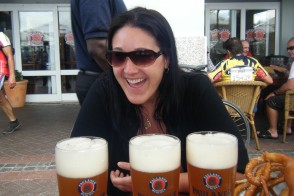 The next day we headed to Stellenbosch for a full day of wine tasting with a driver but in keeping this post all about Cape Town let’s pick back up on the fourth and final day.

We planned to spend the day driving around the Cape Peninsula. We were most excited for the Cape of Good Hope and the penguins at Boulder Beach in Simon’s Town. We made a few stops to take in the views along the way.

Sunshine and blue skies for days!

Part of Table Mountain National Park in the background. 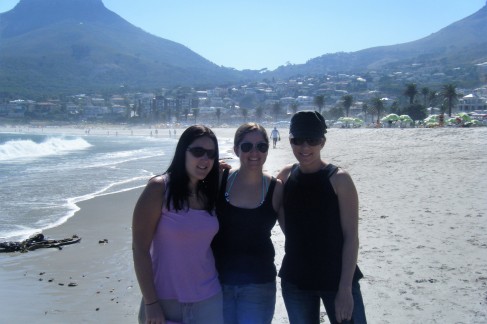 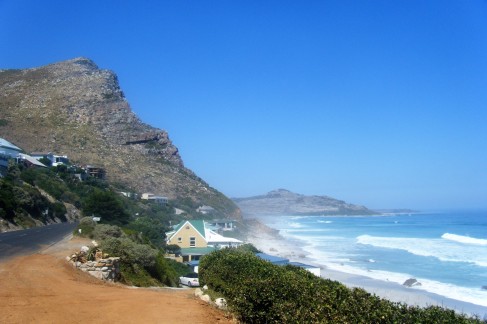 The first animal spotting and we weren’t on safari yet! Baboons were everywhere and they were on a mission to find food. The little one on their mom/dad’s back has the right idea!

This is pretty much the extent of the Cape of Good Hope. You drive up and wait in line for a picture with this sign. #touristattraction #check

The New Cape Point Lighthouse was ominous in the haze.

Be warned there are SO many pictures of penguins coming up.

There are over 2,500 African penguins living in a protected area at Boulders Beach. 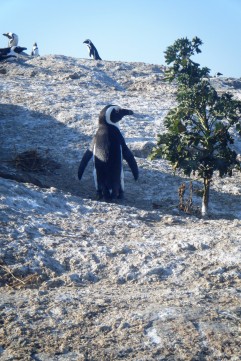 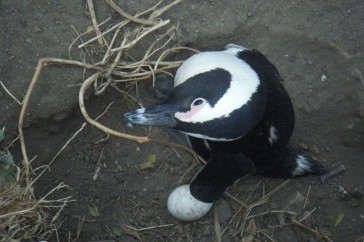 My favorite were the ones pairing off with a friend. 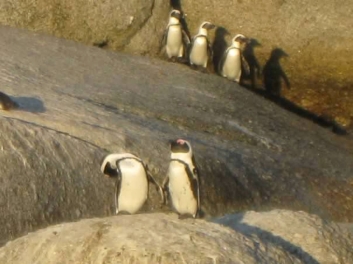 They have a pretty sweet home to swim, play, or just hang out. 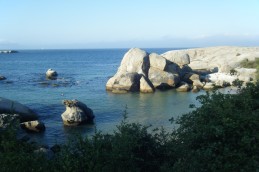 Last penguin pictures….there were SO many of them in the main viewing area. 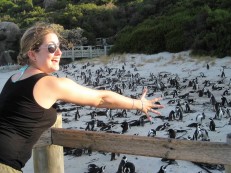 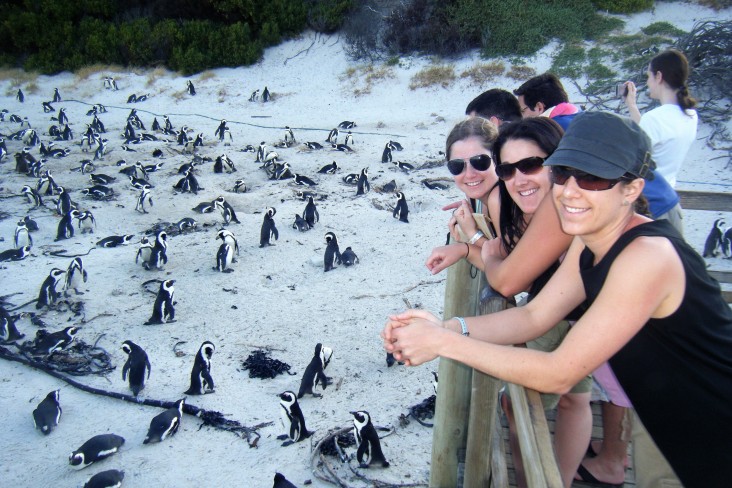 This sunset picture below cracks me up. Not sure why I am still holding the penguin brochure OR why I have knee length jeans?!

That’s a wrap for Cape Town! We hit many of the main sights and made it work when we arrived without our luggage or when we couldn’t go to Robben Island. Cape Town surprised me in a good way. It was extra special and ridiculously fun exploring with two amazing friends who I have known since middle school.

Be sure to check out the rest of the trip: Stellenbosch, Blyde River Canyon, and Kruger National Park!

Question: Do you travel with a spare outfit and toiletries in your carry on bag in case you arrive without your luggage or do you just wing it like I did on this trip?