We spent a total of 6 nights, 7 days in Japan but I will be breaking it into two parts to cover Tokyo and Kyoto separately.

After three full days of sightseeing and amazing food finds in Tokyo we set off for Kyoto. One of the reasons that we purchased a JR rail pass in advance was to travel between Tokyo and Kyoto on the Shinkansen or the bullet train. (See tip below). The trip is approximately 2 hours and 20 minutes. Be sure to secure a seat on the right-hand side of the train for a view of Mount Fuji (in the back middle portion of the picture below) a little under an hour after leaving Tokyo.

The best things to do in Kyoto are reserved for those willing to walk. I think we were up for the challenge after covering 37 miles over three days in Tokyo. This is the most walking we’ve racked up on a trip to date. We planned to check out The Path of Philosophy, Fushimi inari taisha shrine, Kinkaku-ji Temple, and Gion while leaving the rest of the time open to add activities or simply take it all in.

We arrived at the Kyoto train station around noon and went in search of the hotel shuttle bus. As a frequent business traveler I was able to use points for our stay at the Westin Miyako Kyoto. The hotel was a bit of a drive from the center but it was conveniently located near The Path of Philosophy and public transportation was easily accessible, including the train station shuttle.

We dropped our luggage off at the hotel and set out to explore The Path of Philosophy, a pedestrian path that is approximately 2 kilometers long and passes several temples and shrines. We started at the south end due to the proximity to the Westin. The first temple that we visited was Nanzen-ji, a Zen Buddist temple. 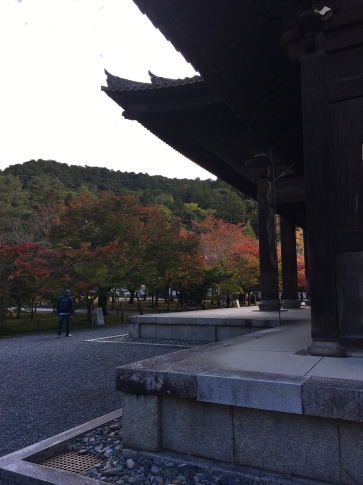 We didn’t spend a ton of time at Nanzen-ji since it was already after 2 p.m. and we planned to visit a couple more temples before the sun set in the five o’clock hour. It takes approximately 30 minutes to walk the entire path but given a couple of stops it could take a few hours so we had to hustle before we ran out of daylight.

We paid to tour two temples along the path. The first one that we entered is called Eikan-do temple. The first building that you see is brightly decorated and has a small rock garden next to it.

Eikan-do is even more colorful in the Fall as the trees are all brightly colored, too. 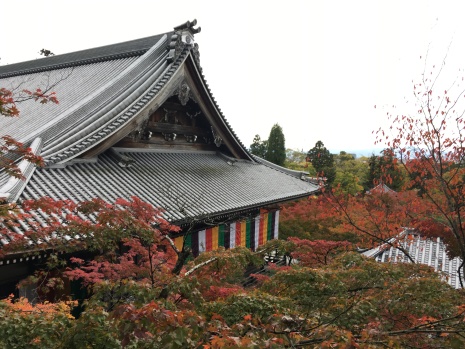 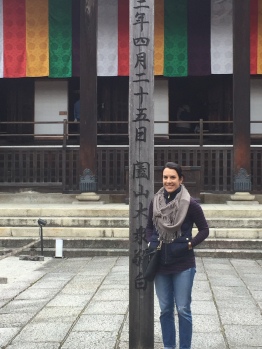 Despite needing to hustle, we decided to sit down and enjoy the view at one of the ponds while having a snack and green tea. I can’t remember what we ordered but the items on the sticks were chewy rice flour treats. 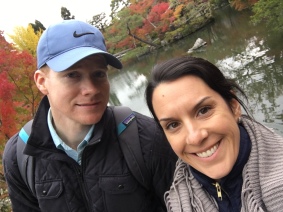 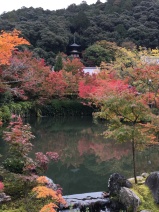 After devouring the snacks and wishing I had a selfie stick, we headed back to the path and made our way towards the north end. We found our way to Ginkaku-ji temple and paid to enter. It was first a retirement villa in the 1400s and then turned into a Zen temple. There was an impressive rock garden near the entrance. 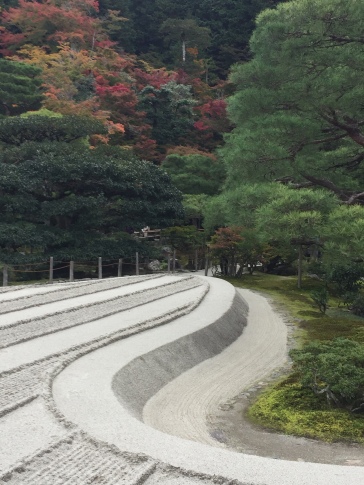 A path takes you through moss gardens and past streams before offering a view of the expansive grounds and the city in the distance.

We exited the path at the north end, and not knowing any better, we took a longer less scenic route back to the hotel. It was close to dinner time so we headed to Ippudo Ramen where we waited in the street until a table was available. There are a couple locations in NYC so we don’t have to travel quite as far for our next bowl of Ippudo ramen. 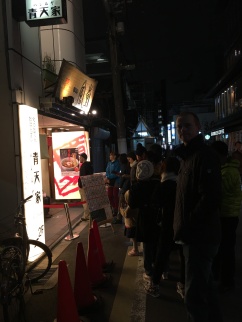 After dinner we headed to a sake bar called Yoramu. Sake is the main event here and all about the experience at this cozy bar for maybe ten people max. I enjoyed the opportunity to learn about the different varieties and sampled a couple but I still like the pretty labels and different glassware more than sake itself. I much prefer champagne or wine, however, my travel partner quite enjoyed the sake lessons and found a couple that he liked so it was a success! Highly recommend seeking this place out in Kyoto if you like sake! 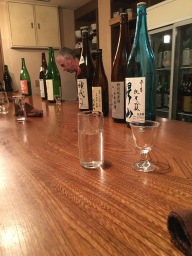 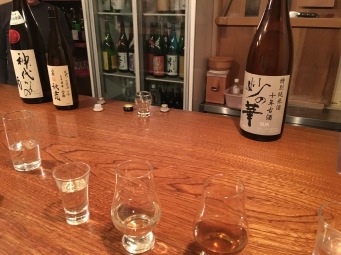 The next day we had quite a few sights on the agenda so we got up bright and early and headed to the Fushimi inari taisha shrine. We were hoping to beat the crowds but many others had the same idea. 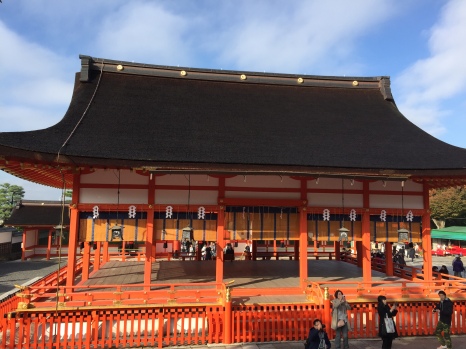 The shrine has thousands of red/orange gates that span ~4 kilometers up a mountain. 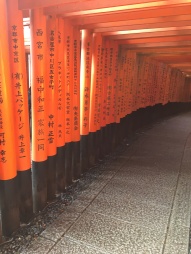 The shrines pay tribute to Inari, the god of rice, sake, and prosperity. Over time businesses have donated each of the red gates called torri in seeking a blessing for their business venture. 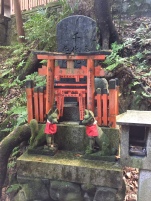 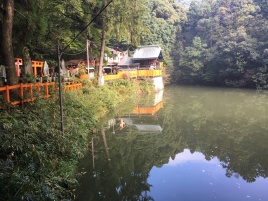 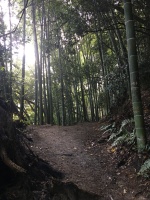 The further up you go, the fewer people are on the trail. The views of Kyoto at the top are certainly worth the stairs and climb. The round trip walk took us about two hours with plenty of stops to check out the torii gates, views, or to cool off. 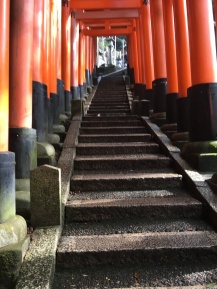 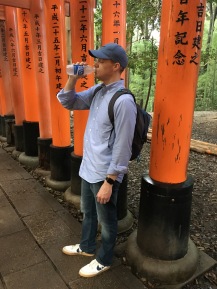 The path down meanders through another side of the mountain so be sure to take all the pictures you want along the way! This was our favorite memory of the trip and well worth the trek to the top. 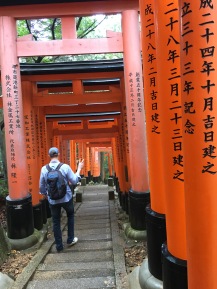 After paying our respect to Inari we jumped on the train and headed to the bamboo forest. It was super crowded and out of the way. But if you find yourself at the bamboo forest, there are a lot of shops and quick food options nearby if you need a snack. We grabbed sushi and green tea ice cream to eat en route to the forest.

We wanted some more space so we exited the forest and set out for the Golden Pavilion. It was quite a hike from the forest but we couldn’t find a taxi and the train didn’t go all the way there so off we went.

Kinkaku-ji or the Golden Pavilion is another retirement cottage turned temple. The reflections in the pond’s waters were incredible. This is my favorite picture of the trip!

The grounds were just as spectacular and had well groomed walking paths to get a closer look. 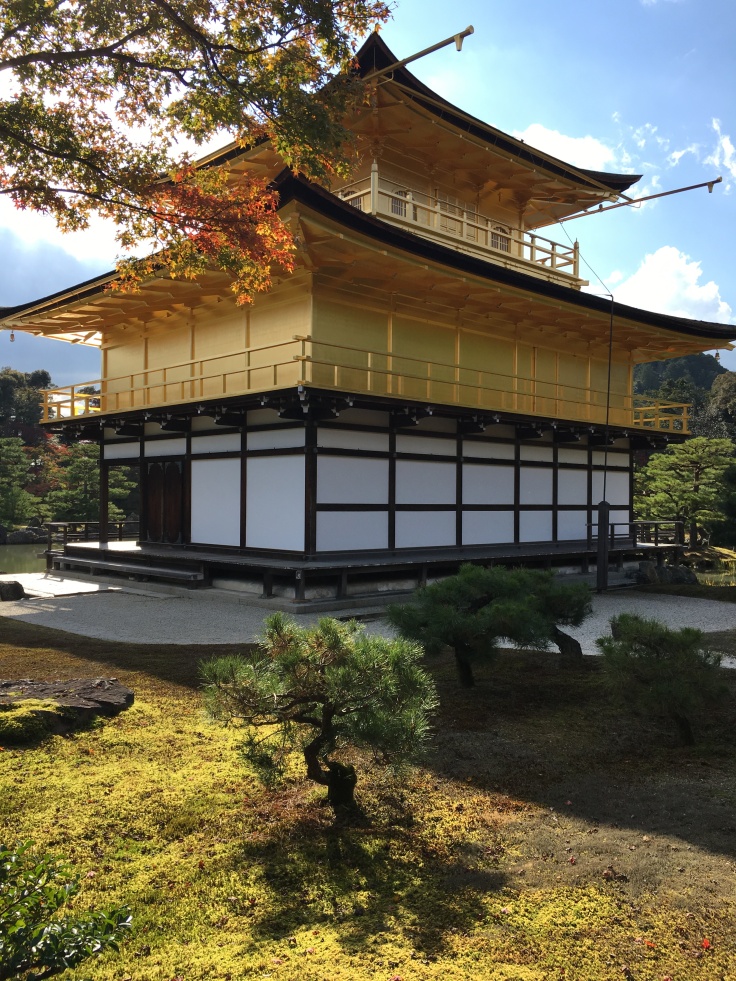 Since we were in the area we decided to check out Ryoan-ji, a temple known for its rock garden. It was so peaceful and zen like in the garden. Despite tons of tourists, folks simply sat in silence in the garden admiring the rocks. It was a nice peaceful break after 5 hours of non-stop tourist activities. 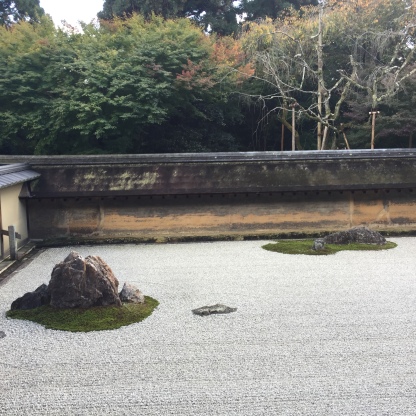 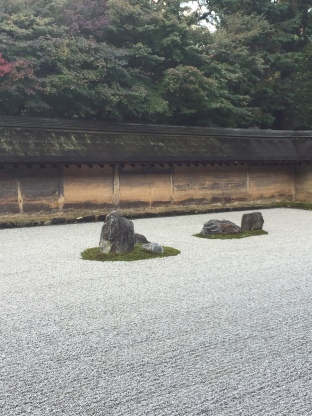 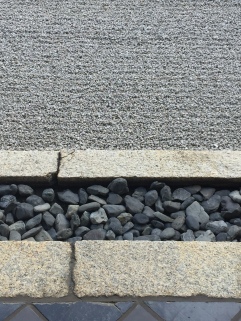 Nijo-jo, where you take pictures of taking pictures. Also a castle that has an outer wall and moat in addition to a second defensive wall and moat on the inside. 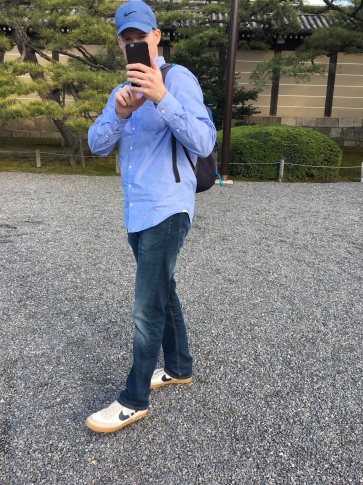 Supposedly the status of the guest determined if they received access inside the second defensive wall. Highly recommend the audio guided tour if you visit so you understand what you are seeing as you explore the property.

We were a couple of blocks away from the Ritz Carlton hotel so we headed there for happy hour and to reflect on our second day of touring Kyoto. I should have snapped the picture before we devoured the snacks but needless to say, the Ritz was nice and absolutely where I would like to stay next time. The location is much more central and the hotel is more modern and fresher than the Westin. 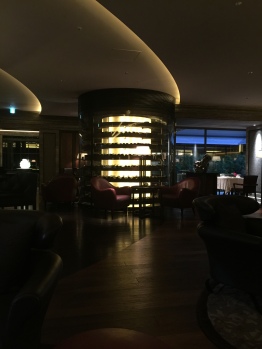 We walked 14 miles during our adventures that day and treated ourselves to big noodle bowls at Honke Owariya. We ate at the Takashimaya location on the 7th floor of Takashimaya Kyoto department store. I am still amazed at the vastness of Japanese department stores and the food options within the store!

After dinner we strolled through the quiet red paper lantern lined streets of Gion. We were hoping to see a geisha, and we did, but I didn’t snap a picture so I guess it didn’t happen?!

That was all there was time for in Kyoto since we had an evening flight from Tokyo back to the United States the following day. We did A LOT in two days and managed to cover another 25 miles walking in Kyoto. We probably could have spread some of the activities across three or four days but Kyoto was a great addition to our itinerary. Kyoto and its temples, shrines, gardens, and castles are beautiful in the Fall so try to catch the autumn colors if you go! I sure hope to return one day soon.

Below is a snapshot of our day by day itinerary and where we stayed in both Kyoto and Tokyo.

Question: Any tips for how to explore Kyoto?

One thought on “Kyoto”