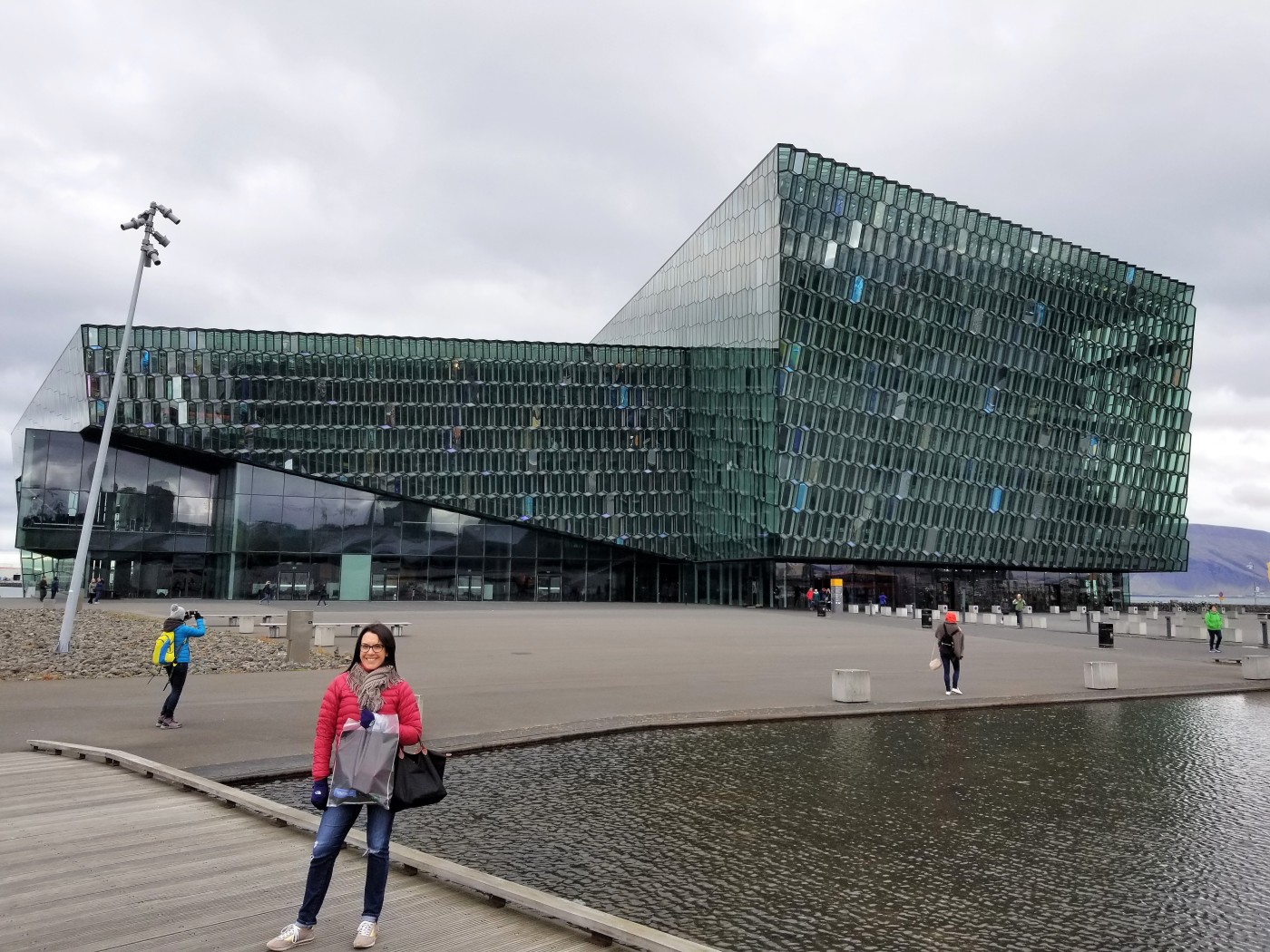 After spending the first three nights of our two-part European vacation in Stockholm, Sweden, we touched down in Iceland on a damp and dreary Tuesday afternoon. We planned to spend four nights in Iceland, the first and last in Reykjavík and the middle two near the Golden Circle and Vik. Here’s the Reykjavík recap.

Upon landing, we picked up a questionable rental car and headed directly to the Blue Lagoon where we had a 5 pm reservation. While there wasn’t a lot to necessarily look at over the course of the 20-25 minute drive, the Icelandic landscape is very dramatic and different than what we are used to seeing. There are moss covered black lava rocks everywhere, everything is incredibly flat with the exception of the occasional volcano or mountain in the distance. It was also overcast and windy, which is the norm in Iceland. As we approached the Blue Lagoon we started seeing signs of geothermal energy. Fun fact: ~70% of Iceland’s energy comes from geothermal sources.

The Blue Lagoon’s website and reservation details were very descriptive and helpful in preparing us for the experience. Upon entering, you receive a towel and a wristband, which essentially acts as your locker key and a form of payment for anything you consume (beverages, additional masks, etc.) while in the lagoon.

After securing our belongings in the lockers and ensuring I had enough conditioner in my hair to avoid the straw-like effects of the geothermal water, we regrouped at the door that leads to the lagoon. To avoid walking right out into the elements, there is an indoor ramp that leads into the water. If you take this option you then have two ways to get to the main lagoon, both under bridges. Alternatively, you can walk right out in the lagoon but that requires dealing with the elements until you are submerged in the warm water. Once in the lagoon, everyone (us included) heads straight for the lagoon bar to receive their complimentary beverage of choice to enjoy while soaking in the lagoon.

It was organized chaos and close quarters as everyone jockeyed for position but after 10 minutes or so we had our drinks and could finally take it all in. Cheers!

After the initial shock of SO many people in the same place, we were able to spend the next hour relaxing in far corners of the lagoon. Check out the lifeguard, they look more like security guards in all that gear.

A silica mud mask also came with the cost of admission. You can pick it up at a mud mask station along the left-hand side of the lagoon. 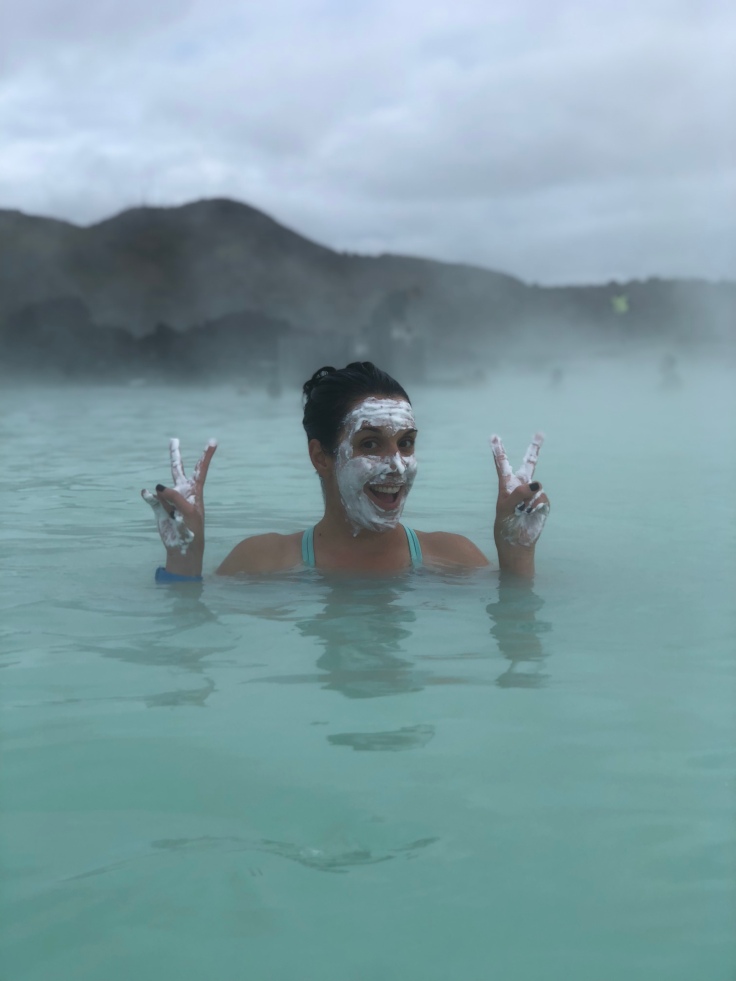 We stayed for a little over an hour before heading into Reykjavík to check into our hotel. We booked a one night stay at the Reykjavík Konsulat Hotel (it’s a Curio by Hilton property) that opened mid-2018. The location was great, right in the city center and also a few blocks away from our dinner reservation. 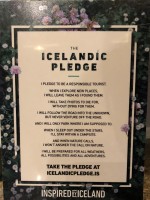 The Grill Market was recommended and has great reviews so we made a reservation in advance to ensure we ate there one of the two nights we were spending in Reykjavík. It was hard to find as the restaurant is tucked away behind other restaurants off of a main road. There was an open kitchen on the main floor with most of the seating on the lower level. We went all in on Icelandic cuisine and had puffin and horse (not me), and cured salmon, and halibut. It was our first introduction to Icelandic butter with volcanic rock salt and kelp salt. There was something about the bread and butter in Iceland that can’t be beat. Highly recommend securing a reservation if you will be in Reykjavík. 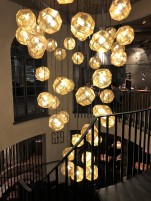 The next morning we planned to spend some time exploring Reykjavík before heading to the Golden Circle. 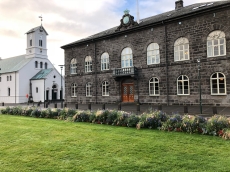 As you ventured further away from the older part of the city center, the buildings and streets were filled with art.

Reykjavík is ideal for using landmarks to give directions…go to the corner with the red building that has a rainbow, then look for the black building with a white design and a rose street sign. I’d avoid the street with the eagle though, ha! 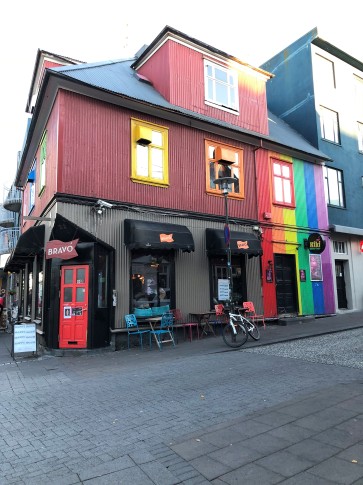 Hallgrimskirkja church is something most tourists seek out to take a picture of downtown Reykjavík from above. We were going to save it for later in the week when we returned but we ended up finding other ways to get a view from above. 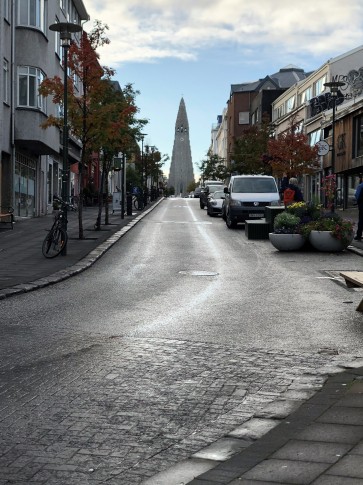 Instead we opted to visit the Perlan glass-domed observatory on the outskirts of town on our way to the Golden Circle. 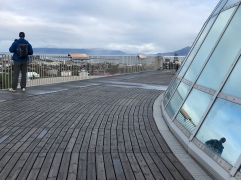 Despite the clouds it was a relatively clear day with great visibility. 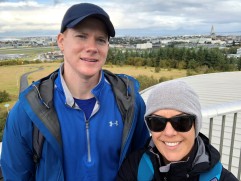 We may not have the postcard view from the cathedral in town but the views were expansive from the top of Perlan. 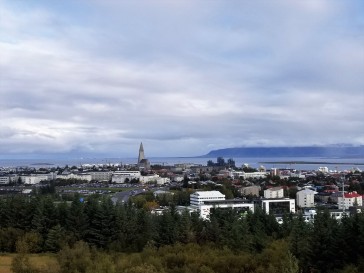 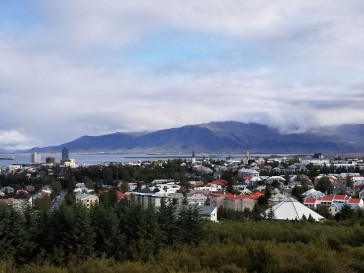 Earlier that morning we spent about an hour walking around and just about covered all of Reykjavík’s city center ranging from our hotel all the way up to the cathedral. 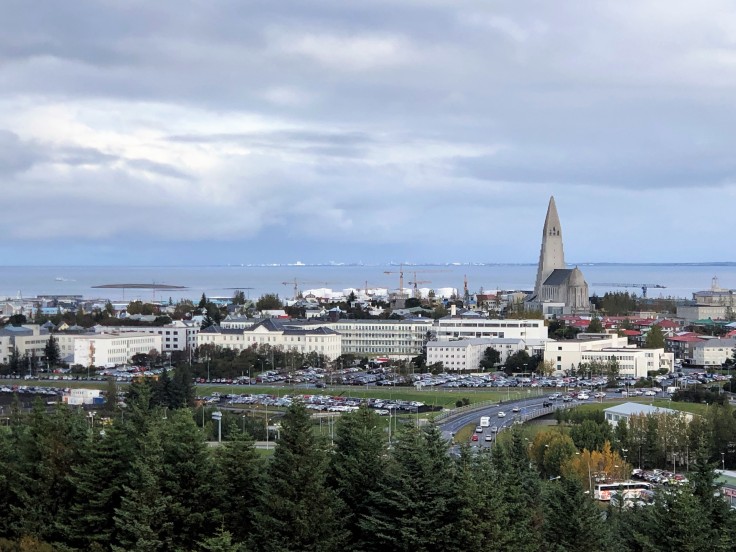 We spent about 20 minutes taking in the views and reading the corresponding maps that pointed out areas of interest in the distance. There are a couple of exhibits that you can pay to tour while there but we wanted to get on the road and out in nature since we were dressed to hike and explore the great outdoors. Backpacks not necessary for this activity.

Later in the week we returned to Reykjavík for one final night and half a day before our return flight to the United States. We switched hotels and stayed at the Hilton Reykjavík Nordica, located a bit further from the city center but easily accessible via car, bus, or taxi. The view from our room was great and another fantastic alternative to the cathedral in town.

Locals (and probably tourists too) stay out pretty late in Reykjavík. The hotel front desk attendant told us it was too early to go out as most people go out closer to 1 am and stay out until 6 or 7 am. No thank you! It was 5 pm and we were fine with heading out on the early side! After telling him we wanted to take the bus or a taxi to a spot for happy hour, he insisted that we walk to Hlemmur Mathöll, Iceland’s first food hall.

I don’t think he realized that we walked 60 miles at this point in less than a week but he was adamant that we walk because “it is so nice outside”.  It was jacket weather but we didn’t argue and we set off for the food hall. It was a good halfway point in the walk, not much flair on the outside but the inside had quite a few vendors and was a great recommendation.

We had another recommendation from a family member to check out the old harbor so that is where we headed after the food hall.

The restaurant Sea Baron is situated in the harbor and boasts having the world’s best lobster soup. I haven’t had that many lobster soups to compare but I haven’t met a lobster that I didn’t like. We arrived at the right time and took two of the last seats available inside the small seating area. The soup was delicious and hit the spot. You can also pick out various types of seafood out of a cooler to have grilled while you wait but we weren’t that hungry and just ordered two lobster soups. 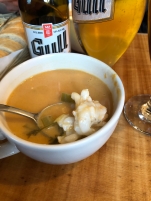 We took a stroll along the harbor on the way back into the city center and caught a glimpse of the Harpa concert hall in the distance. 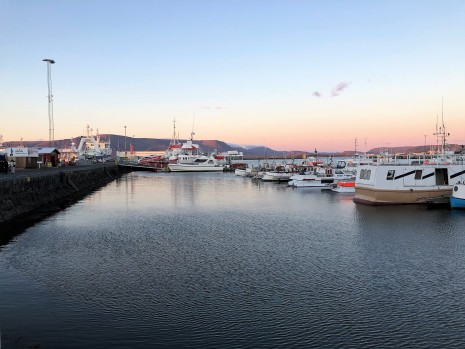 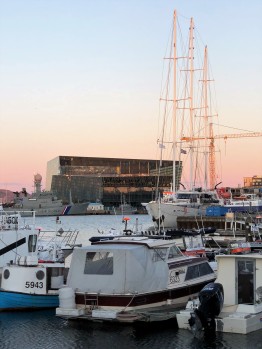 The next morning we checked out of the hotel and parked the rental car in a parking garage near the city center. We didn’t have to leave for the airport until after lunch so we wandered the streets one more time in search of coffee, souvenirs, and the remaining sights that we didn’t fully explore. One of those was the Harpa which opened in 2011 and has an impressive glass facade that’s inspired by the basalt columns found on the coast of Iceland. We didn’t time it right to go on a guided tour but you can enter and explore some of the open public spaces on your own. 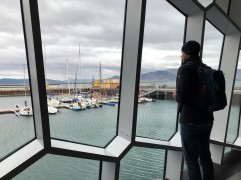 I am sure Reykjavík has changed a lot over the last couple of years and it probably looks and feels different depending on the time of year that you visit but it’s charming and just the right size to use as a launch pad for your Icelandic adventures or to sandwich your out of town adventures like we did.

Check out the rest of our Icelandic adventures: The Golden Circle and Ring Road to Vik

Question: Did you get a view of Reykjavík from up above? Should we have gone to the top of Hallgrimskirkja church?

One thought on “Reykjavík”