In case you missed the first part of our Iceland adventures, read about Reykjavík first. After spending our first night in Iceland relaxing at the Blue Lagoon and exploring downtown Reykjavík, we set off for the Golden Circle, or at least part of it. We were checking into the ION Hotel later that evening and planned to hit up a few of the main attractions in the Golden Circle. First up was Þingvellir (Thingvellir) National Park about a 45 minute drive from Reykjavík.

An alternative name for the Golden Circle should be Rainbow Ring! We saw so many rainbows I stopped counting and fumbling for my camera every time one came into sight. Never found that pot of gold. 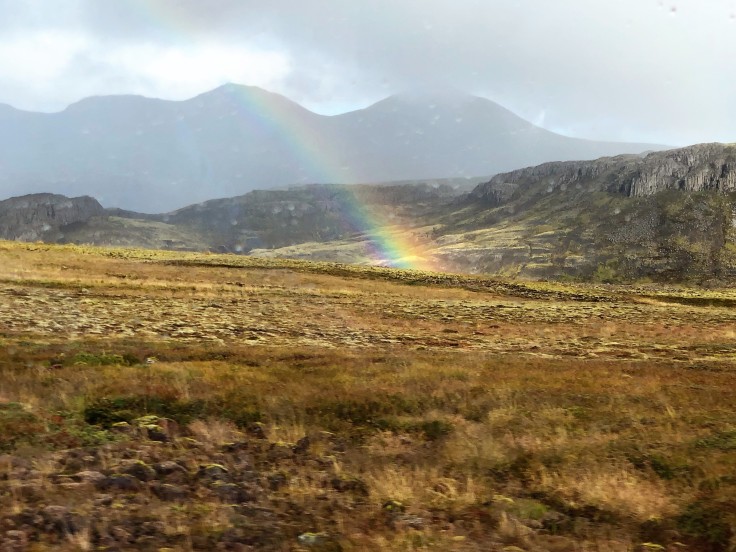 The drive was beautiful with such diverse landscapes. Hard to believe we were less than an hour from Reykjavík. 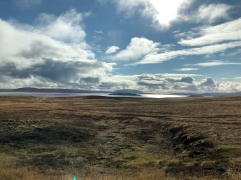 What a view of Þingvellir (Thingvellir) National Park! Tip: if you visit the park and plan to walk a decent amount, do not park in the main visitor center. You will still get this view later in your visit without having to pay to park! We didn’t know there were free lots further out from the visitor center until we were already in the park.

Thingvellir translates to “fields of parliament” and the site of Iceland’s parliament from the 10th to 18th centuries. Representatives from all around Iceland would come here to create laws, enforce punishment, share news, etc. The park sits in a valley separated by two tectonic plates, North American and Eurasian, that continue moving apart from each other a few centimeters each year.

One of the main attractions is a waterfall that is a short walk from the visitor’s center.

It was a good spot to take a short break while taking in the view. 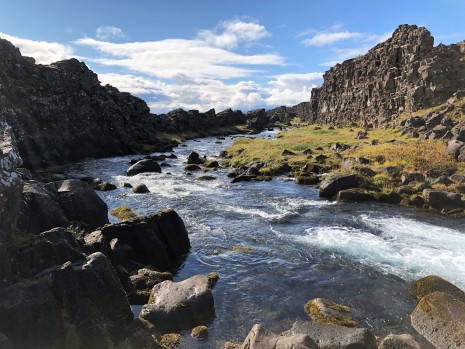 We kept walking further past the waterfall before going to the lower level of the park. There is a slight incline to the top of the tectonic plate that offers a great view, and access to one of those free parking lots.

We wanted to check out the church and ruins so we made our way down to the lower level and along the way spotted another rainbow in the distance. The water was incredibly clear throughout the park. Backpacks not needed for this activity but be sure to bring water. 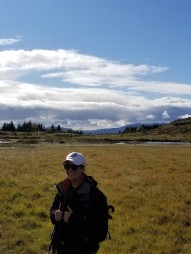 The rainbow was in just the right spot when we got to the church.

The rainbow was really just everywhere.

We didn’t plan accordingly and skipped buying lunch at a grocery store in Reykjavík earlier that morning because we thought there would be at least one N1 gas station out this way to buy a couple of Sómi sandwiches, however, that was not the case so we ended up buying lunch from the park gift shop before moving on to the next activity.

The Geysir Hot Spring area was up next. Strokkur is an active geyser that sprouts water into the air every 4-5 minutes. After a short walk from the parking lot you will find a bunch of tourists circling a wet and muddy area. I was caught off guard the first time the geyser exploded so I was late on the photo taking as I was took it all in. 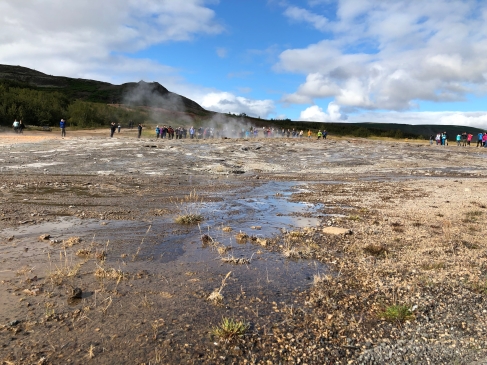 The second time it was fun to people watch as everyone was waiting in position for a solid 4-5 minutes just in case the geyser erupted. Gotta get that shot. I still jumped but I got most of it now that I knew the drill. We watched it a third time from the other side of the geyser and realized there was a clear view of water so you could watch it slowly come to a boil and then explode! 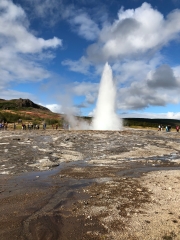 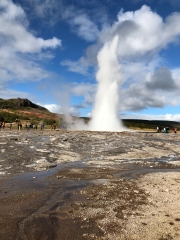 We had one final stop in mind before heading to our hotel for the evening. We got back into the rental car and headed for the Kerið volcanic crater lake.

This was the only spot on the Golden Circle that charged an admission fee. For the (low) cost of admission you get to walk around the red volcanic rock and descend down below to a blue-green lake. Fun fact: Björk (an Icelandic singer) once performed on the lake!

We followed the trail counter clockwise and enjoyed the higher view of the town we just passed through. 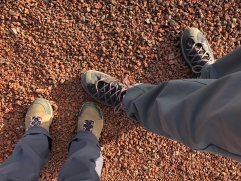 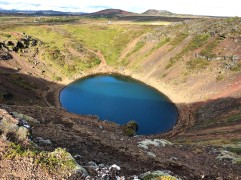 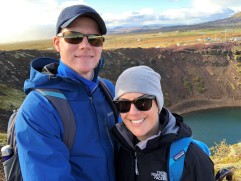 It was a pretty easy climb around the crater before descending down towards the lake. The lava rocks were light and airy down by the water. If you are in the area it is worth a quick stop but otherwise there is plenty to see along the Golden Circle. Backpacks also not needed for this activity.

We got back in the car and headed for the ION hotel. Earlier in the day we received an email from the hotel informing us that one of the roads to the hotel was under construction, was unpaved, and contained large large rocks that might cause a flat tire. Our Dacia Duster certainly couldn’t handle that so we took a bit of a detour, which still took us around some rugged terrain, wide open spaces, alongside a lake, and of course a rainbow. 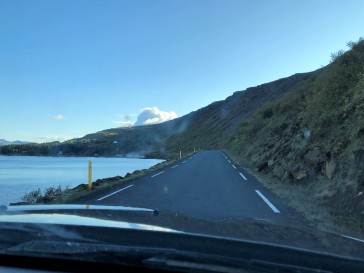 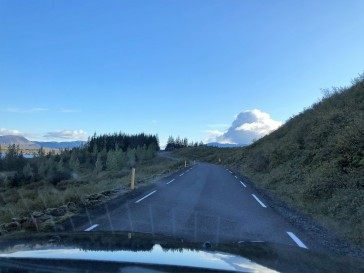 The ION hotel is less than an hour’s drive from Reykjavík but makes for a great pit stop along the Golden Circle if you plan to continue traveling further south or just preferred to stay outside of the city.  The ION hotel is a small boutique hotel set against mountainous lava fields and promises relaxation with the possibility of seeing the Northern Lights without leaving the property. 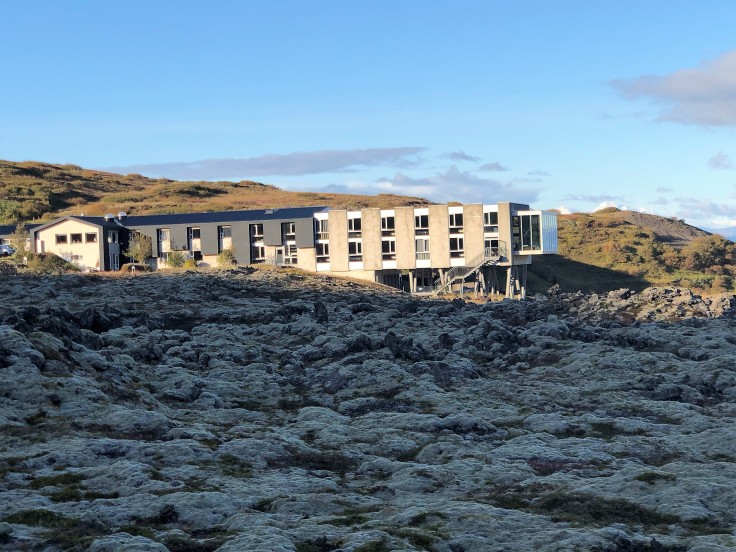 Upon checking in we were greeted us with a champagne toast and a suggestion to check out the geothermal pool as the sun was about to set. Both sounded great so we headed to the hotel’s Lave Spa before having dinner in the hotel’s restaurant, Silfa.

The next day we had breakfast at Silfra before getting on the road.  I spent a few minutes relaxing in the front of the hotel at the Northern Lights Lounge before we hit the road for the next adventure.

If you are looking for a place to relax outside of Reykjavík, the ION hotel is a great option, as long as you are OK with a power plant next door! 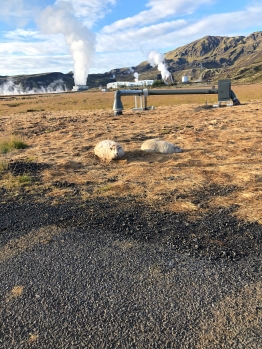 Check out the rest of our Icelandic adventures: Ring Road to Vik and Reykjavík.

Notable sights and experiences in and around the Golden Circle:

Question: Have you seen the Northern Lights?

One thought on “(Part of) The Golden Circle”