I can’t believe it’s taken me until 2013 to make it Hawaii. It was really hard to narrow it down but we wanted to learn to surf and explore volcanoes and waterfalls so we selected the islands of Maui and Oahu for our first trip to Hawaii.

We had 9 nights/10 days to fill with activities and wanted to limit island hopping as much as possible so that we could get a feel for the island and have some time built into the agenda to spend at the pool and beach.

We left the East Coast early Sunday morning and had a layover in San Francisco before continuing on to Maui where we spent six nights. We were pretty hungry by the time we landed in Maui so we took a friends recommendation and headed straight to a lunch reservation at Mama’s Fish House. Overall a bit touristy but the location was right on the beach and it was a good introduction to Maui’s food scene.

After lunch we headed towards the water to explore the property before driving to Lahaina where we would be staying for the next six nights. 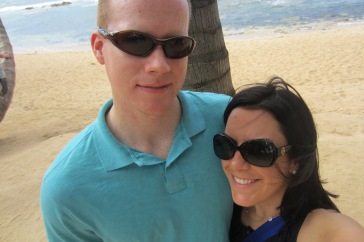 We settled in and then walked along the water and beach path exploring Ka’anapali Beach as we waited for the sun to set.

Ohmygoodness, Maui is gorgeous!!! This is the same beach, the same sunset. 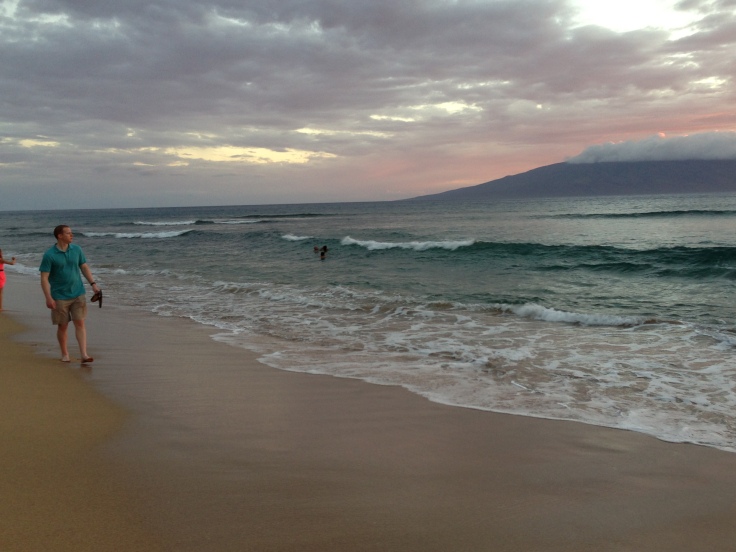 We were pretty tired after spending a day traveling and had a very early aka middle of the night wake up call in order to drive to Haleakala National Park.

On Monday, we woke up at 3am and were in the rental car by 3:30am in order to get on the road and make it over to the park well before sunrise since that was the main attraction. This sort of planning was necessary if you wanted one of the limited parking spaces in the park.

In checking the Haleakala National Park’s website to write this post I realized that the policy changed and you are now required to make a reservation in advance to ensure you have a dedicated spot on the day and time that you want to go. While you might get to sleep in a few more minutes, there is still quite a drive to reach the summit depending on where you are staying.

Nice work by a food truck strategically situated along the road towards the bottom of the summit before you entered the park. Of course we stopped and bought two coffees to go. 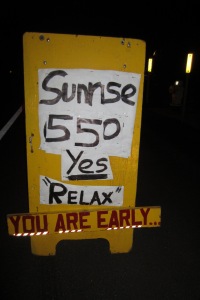 There was some cloud cover that morning so the mountains were peaking out through the clouds while we waited for the sun to rise over the horizon. 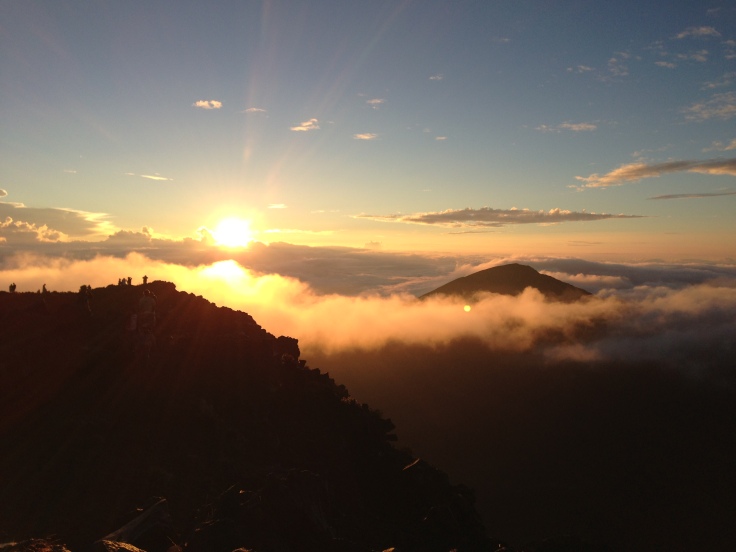 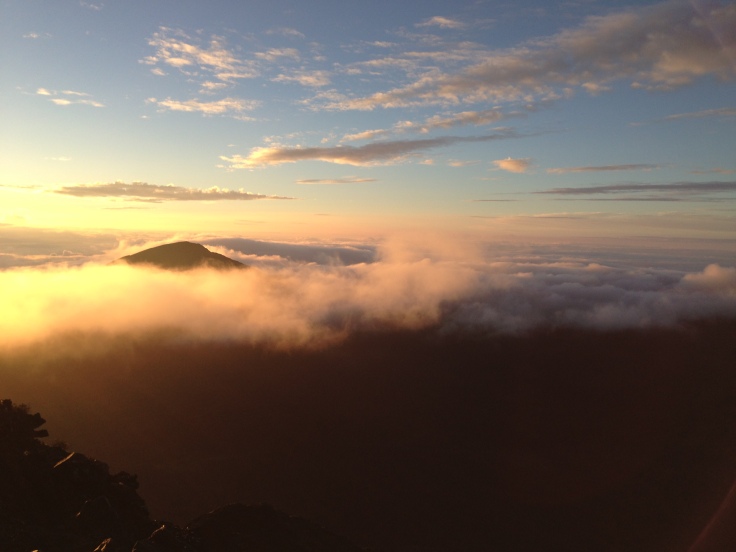 We spent the rest of the day and most of Tuesday at the Hyatt’s pool and beach with a couple of breaks to work out and grab some food. Tuesday we headed into downtown Lahaina to grab lunch at the Cool Cat Cafe. After lunch we tried our first shaved ice at Ululani’s Shaved Ice.

Tuesday’s adventure didn’t have quite as early of a starting time but we were planning on spending the entire day driving and exploring the Road to Hana, a 64.4 mile long stretch that has more than 600 curves and more than 50 bridges, and some of the best views in all of Maui. It also requires a bit of planning, checklists, and prioritization that I live for so this was a great vacation challenge!

Our priorities were water, snacks, proper gear if we got in the water near any falls, and a few spots that we marked as “must see”.

I am a pretty big fan of Top Chef so I was excited to try Chef Sheldon Simeon’s restaurants while in Maui. I planned our first stop around his cafe called Leoda’s Kitchen and Pie Shop so that we could grab lunch to eat at the beach later in the day. 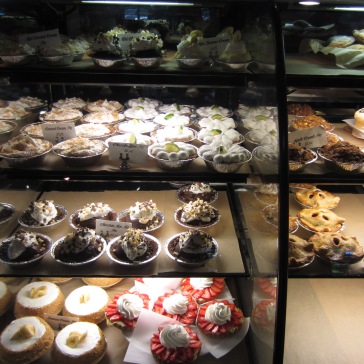 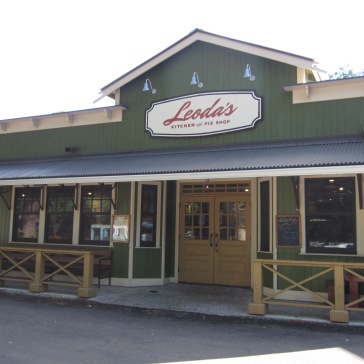 With snacks in hand we set out for Kmart to buy a styrofoam cooler, plenty of water and ice, and water socks so that we could go into the water off some of the trails.

With that we set off to explore! The road has so many hairpin curves and required 100% focus. Glad I wasn’t the one driving. I much prefer navigating.

You can see the road carved out in the middle of the trees in the picture below. This was one of the more scenic stops early on in the drive.

Where it was safe enough to stop, each opening offered a different view all together.

Good example of the narrow and winding road.

Sometimes you miss what’s right in front of you. 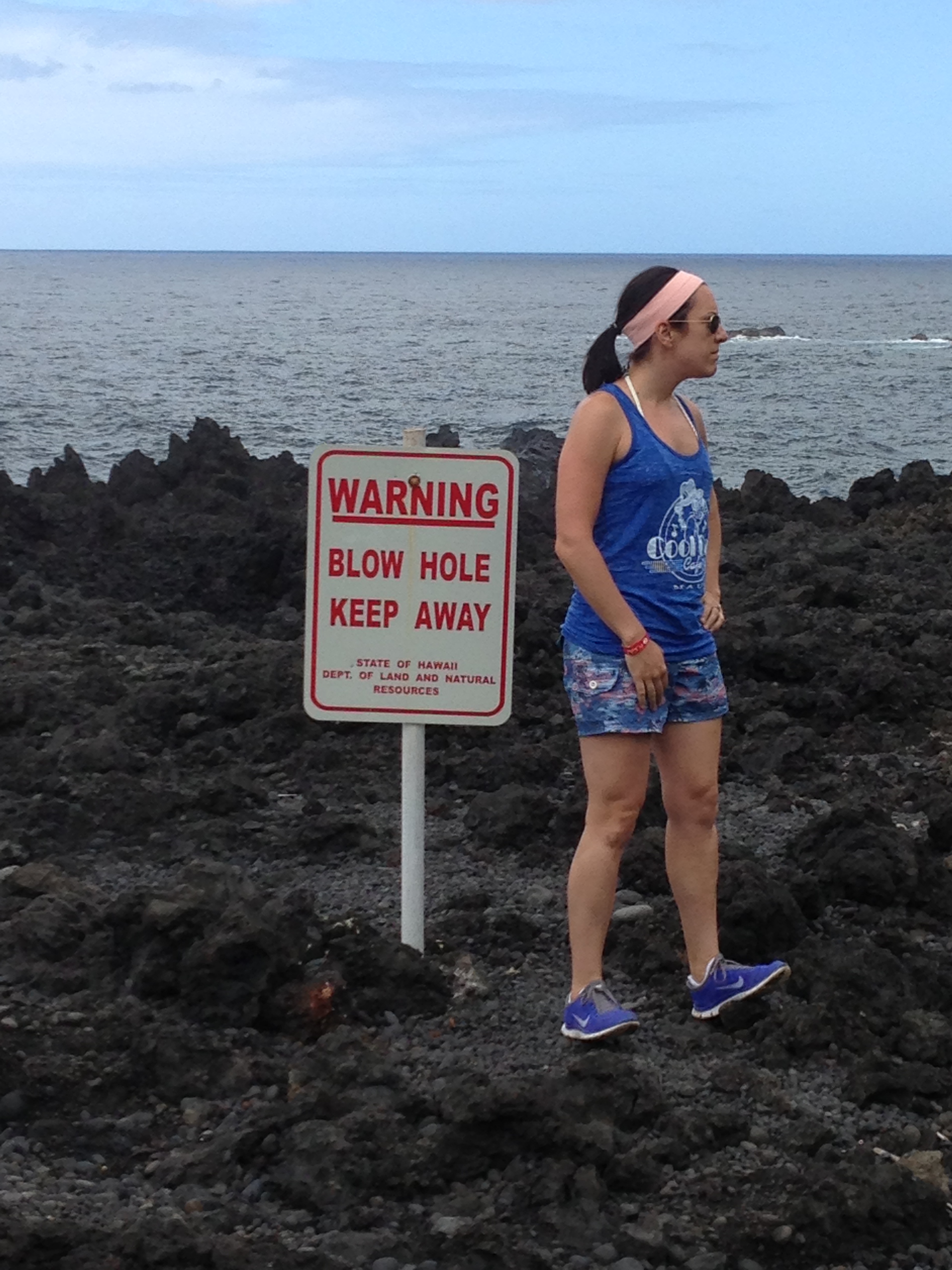 We read about Venus Pool aka Waioka Pond at mile marker 48 and were on the look out for this hidden gem. As of our trip, it was OK to access from the highway pull off but there were several signs warning visitors of their liability and to be respectful.

After a 10 minute walk and some scrambling down rocks we made it to the natural pool. 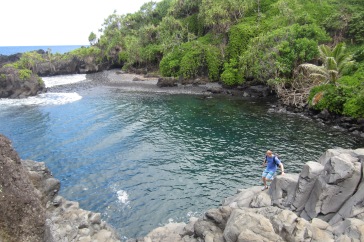 It was pretty refreshing but this place wasn’t just meant for swimming.

This is a great spot for rock (cliff) jumping. 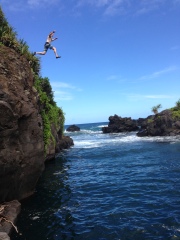 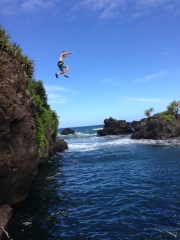 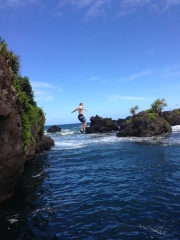 One of the other stops along the road that we bookmarked was a trail that led to a waterfall.

There was a short hike to a black sand beach. The sand is comprised of volcanic minerals and lava fragments. Neat!

Some other scenes from the drive. Didn’t expect to see these cows on a trail!

Overall the Road to Hana was a highlight of the trip. We nearly made it all the way to the end but there was no way that we would get back to the start before sundown.

Pretty sure he was telling me that I was about to fall. 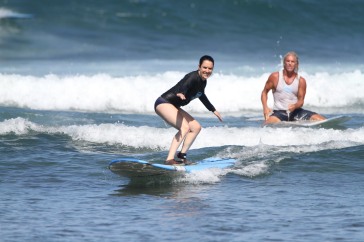 I am not a fan of the ocean so I was all for listening to Arma and trying to shred the gnar. Sometimes it worked out but I never got the hang of what to do with my hands. 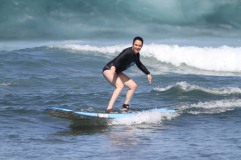 This guy on the other hand was pretty good at shredding the gnar.

Friday morning we went snorkeling at Black Rock at Ka’anapali Beach. Lot of people were jumping off from above but we kept to snorkeling and saw so many colorful fish, several sting ray, and a turtle.

Later in the afternoon we drove to Iao Valley to hike and explore. It looks like Iao Valley recently reopened after a massive flood damaged the park in 2016. 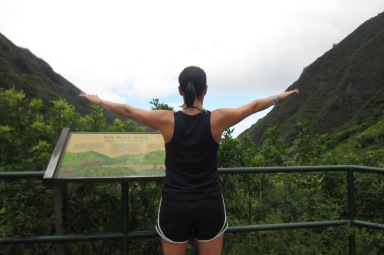 That’s a wrap for Maui.

We spent the next three nights in Honolulu on the island of Oahu. What a view from our hotel balcony! 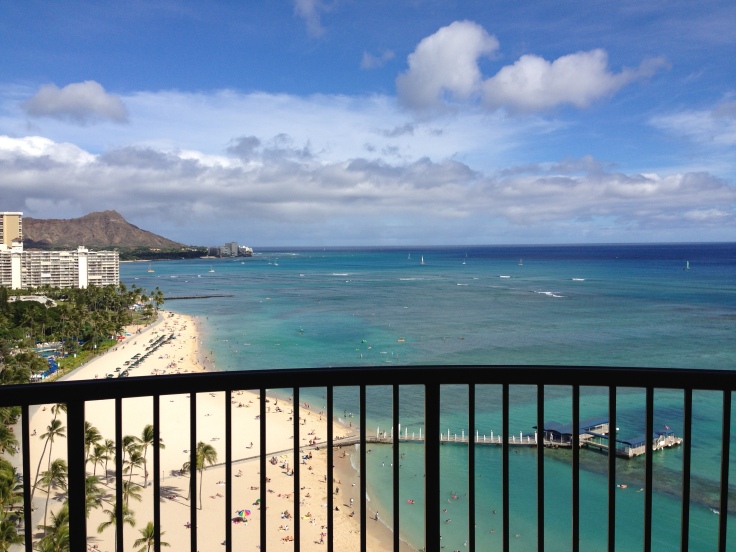 The Hilton Hawaiian Village was ideally located along Waikiki Beach and had gorgeous sunsets. 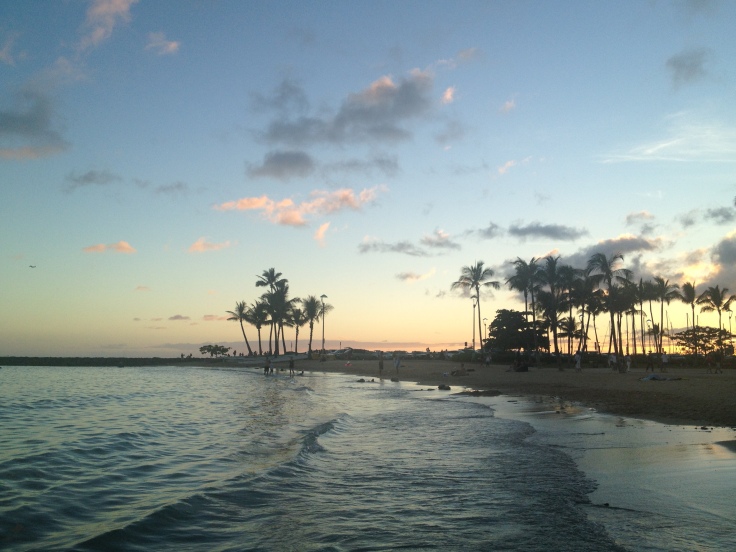 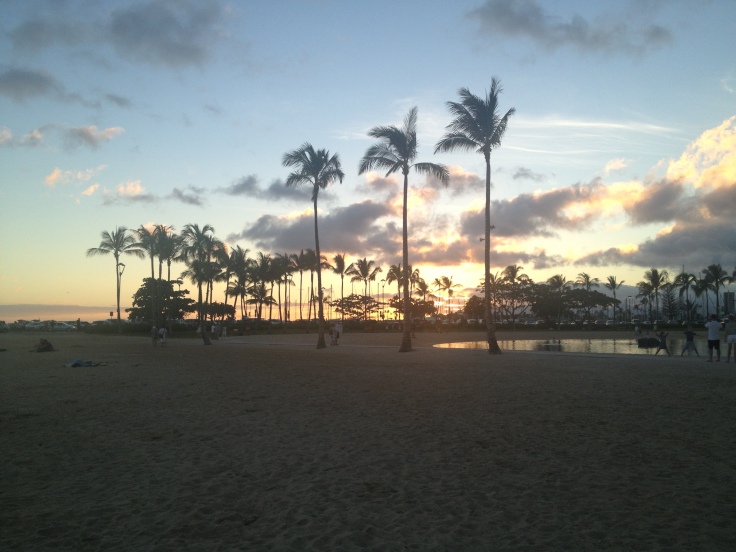 Our first full day in Honolulu was a packed one. We went to Pearl Harbor in the morning and started on the USS Bowfin submarine.

Next stop on the tour was a visit to the USS Arizona Memorial. 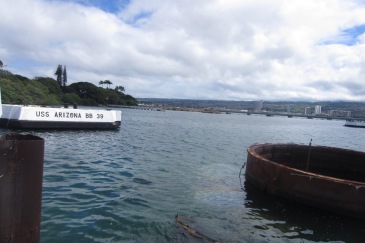 After spending the morning at Pearl Harbor we drove out to Diamond Head state park. At the hottest part of the day. With just the water bottle in my hand.

There were a lot of switchbacks and a few viewing platforms along the way.

After climbing a steep set of stairs and going through a tunnel, this is the view that welcomed us to the top.

A lot of rain was heading our way on Monday so we got up early and headed to the North Shore. There was a well known shrimp truck and often talked about shaved ice on the North Shore, not to mention the Bonsai surfing pipeline. 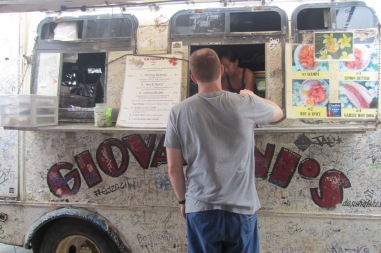 Our luck with sunshine and blue skies ran out at this point so we started driving back towards Waikiki Beach. The rest of the trip was pretty much a wash out until we headed back to the East Coast on Tuesday evening so that’s a wrap for Oahu.

Hawaii was a great combination of activities and relaxation. We were able to check off out pre-trip wish list and had fun trying to surf and exploring the many waterfalls and volcanoes of Hawaii.

Until next time, Hawaii.

Below is a snapshot of our day by day Hawaii itinerary and where we stayed.

Question: We stayed on Maui and Oahu this trip and would like to check out Kauai. What is your favorite island combination when visiting Hawaii?

One thought on “Hawaii | Maui and Oahu”